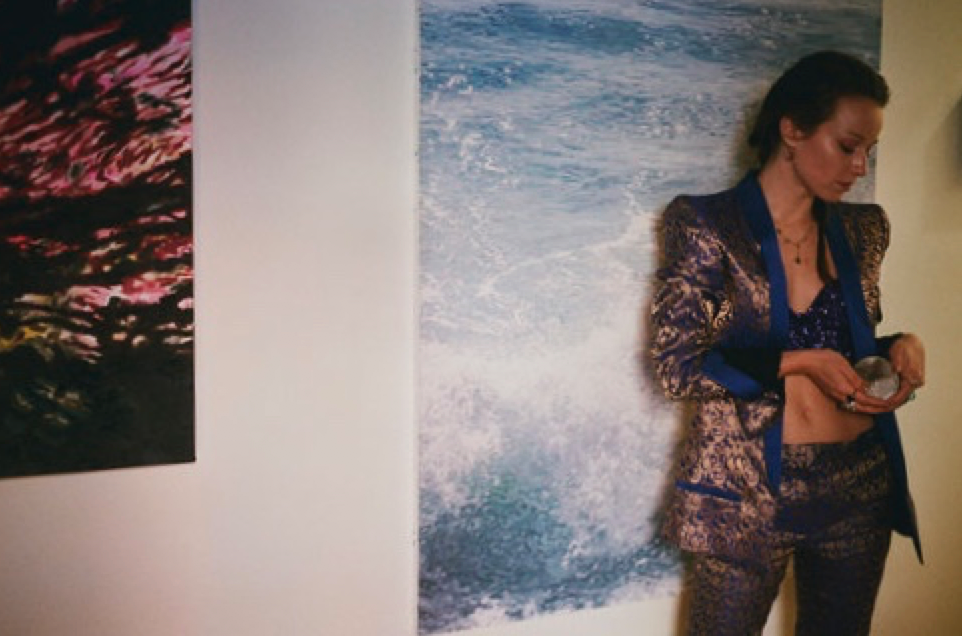 Where do you draw the most inspiration for your work?

Life is my greatest source of inspiration.

The subject matter in my paintings echo people and places that resonate with my personal story. Each body of work stems from a specific philosophical thought, so I am constantly reading and rereading ancient texts. the subjects act as a symbol for these ideas.

Do you listen to music when you paint?

I listen to a mix of music and lectures, there’s a lot of Bonobo and Four Tet but also old recordings of Ram Dass and Krishnamurti.

What is your creative process when starting a new piece or series?

I work in series, each body of work is rooted by a particular theme in philosophy and almost always stems from Plato. I read Plato’s Republic before starting a new body of work. Different themes resonate each time I read it, once an idea is selected I pull from various writers to support the concept. It’s about finding divinity, a sort of balance between the inner and outer world.

Now I am working on a series that deals with the perception of time and the concept of eternity. The main philosophy explored is Presentism; the belief that the present moment is all that exists, and both the past and future are constructs of the mind. For me, it’s this idea that one can experience eternity in the ever-unfolding present moment. I have read several books by Krishnamurti, Ram Dass, Thich Nhat Hanh and Eckhart Tolle all who explore this idea. As well as religious texts as there are many parallels in Buddhist thought and in the Tao Te Ching.

Once the core theme is selected I write a cohesive text to ground the ideas. I then pull photos from an image archive of several thousand photos to develop a cinematic visual concept to support the theme explored. I am constantly taking photos and archiving them. There’s a lot of symbolism and thought that goes into selecting an image. The photo needs to have strength on its own but also lend itself to the curation of the group.

Once a group is selected I play with the visual dialogue to create a story, lending itself to flow in color and subject. Color coordinating each group later helps with the painting process, as I can work on several paintings at a time with the same palette. I then decide on sizing for the group, which paintings will resonate better large vs small. Taking into consideration how they will hang on a wall etc.

My painting process is similarly very methodical. I use the grid technique to transfer the photos to canvas, which allows for a more exact line. I then do a series of color washes to decipher which forms are where. From that point, it’s a slow build of layering color to create a sense of depth and allow for in-person abstraction. My style is mostly inspired by the impressionist movement though I mix elements of pointillism and photorealism into each painting.

As a Friend of The House, what is your favorite part of being at WOM?

The space itself is breathtaking and carries its own aura. The people who work in house are what make it special. the welcoming and enthusiastic energy, I love that it feels like a family, this beautiful sense of belonging. I feel so fortunate to have been a part of the curatorial program and have made so many cherished friendships in the process.

Do you find there’s particular energy when you enter the townhouse?

How did it feel to see your pieces on display in such an iconic setting?

My work is shown mostly in a gallery setting, white walls, minimal environment. This allows for the work to be experienced without distraction. The townhouse was a fun departure as it was amazing to see the dialogue between the work and the space. I loved that the installation felt as though the works were part of someone’s personal collection. that people could coexist with the work outside the context of simply ‘looking’ at it in a gallery.

I loved working with the team to curate the collection in a way that would both complement the paintings and space. The Natural High series installed in the pool room added this psychedelic surf vibe, versus the downtown kids paintings hanging throughout the house which were very ‘New York’.

Where can come to view your work now?

I have a solo show this Fall in Paris but until then I’m happy to host studio visits.

I’m working on a new series so there are a lot of works in progress.

The Smile, Caravan of Dreams

Still mourning the loss of Barneys

Check out some of Emerald’s work below!